Wake Up to Your Favorite Track

My favorite Spotify integration will most definitely have to be this, with the Google Clock app. If you have the Spotify app installed on your Android device, you can now pick the song you would like to wake up to. As for how to select a track from Spotify as your alarm tune, well, tap the ‘alarm sound’ option while setting up an alarm and you will see a new ‘Spotify’ tab here. You’ll see all your recently played tracks under this tab. You can tap to listen to the same and select your alarm tune via the streaming service. 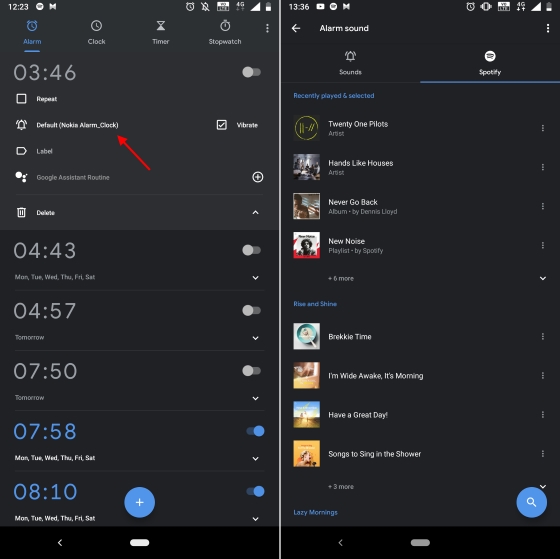 Spotify probably has the best discovery algorithms among all streaming services and it shows off the same by compiling a ‘Discover Weekly’ playlist with new artists and tracks – every week. This playlist refreshes every Monday and if you don’t save a track which you liked, then it might vanish the next week. So, here’s a nifty trick to automatically save tracks from the ‘Discover Weekly’ playlist. All you need is to link your Spotify account to IFTTT (Free, Android and iOS), search for all Spotify recipes, and activate the ‘Archive Spotify Discover Weekly tracks’ recipe. All of the tracks recommended in this playlist are saved in another Spotify playlist, so no worries if you didn’t save some of the tracks you liked. Just go to the Discover Weekly Archive playlist, which is regularly updated through IFTTT, and find that sweet melody again. SEE ALSO: 10 Cool IFTTT Recipes For Google Assistant 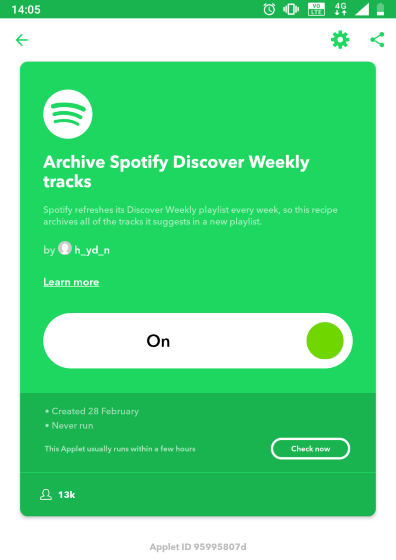 I've actually posted in this in LPT sub but the mods there insisted that it was a product/service recommendation and removed the thread. I hope it stays up here so that everyone benefits from it.Spotify's "normalize volume" setting kills the overall music experience. Some say that it only reduces the volume, some say it degrades the quality while reducing the volume. I say you'll definitely be better without it and and have a thousand times better sound.Turn it off in the settings, switch to another song, see if it makes any difference (I recommend "All Time Low" and "Bury a Friend" for a test). In case of no difference, just hop back.Enjoy!

Don't ever listen to comedy albums on Spotify, or you'll lose one of your Daily Mix slots forever.

If you didn't already know, Spotify handles comedy albums horribly. It doesn't know the difference between a comedy album and a music album, and treats both exactly the same. Most comedy albums are intended to be played from start to finish, and playing a single track from the middle of an album doesn't always make sense.So when you listen to a comedy album, Spotify thinks "oh look, here's another genre for me to generate a random track list for", and boom, there goes one of your Daily Mix slots. I haven't listened to a comedy album on Spotify in several months, but Jim Gaffigan's pale-ass face has been there every day ever since.On the plus side, the Daily Mix algorithm is pretty awful (they're always 90%+ stuff I'm already familiar with, and 75% liked tracks), so it's not a huge loss.

I think this is OSX only: type cmd+G in any playlist to enable album art as a playlist column.i.e.: screenshot

Using an old inactive smart phone as a Spotify device for your car. (auxiliary input required).

I got sick of lint/hair getting stuck in my Droid RAZR Maxx's audio jack. I still had my previous phone laying in a drawer (droid x.) I synced my favorite playlists to the Droid X using my wifi at home. I always thought the battery was unimpressive in the droid X, but now its not looking for cell phone towers, I have all the apps uninstalled except for spotify, and turned off the wifi (After I synced from home.) This old Droid X which I've had since the day it came out, is lasting 5-7 days on a full charge. I don't have to constantly deal with ppl calling/txting my phone when I'm getting down on some music, its great. So next time your due for an upgrade, don't sell your old smart phone for 50-100$, use it for spotify!! And a 32gb micoSD card is under $30 now a days. Oh and if you have a wifi hotspot, you can still use the search.

Our last tip on the list of the 10 best Spotify tips and tricks is Spotify Stations. Although you can always save your favourite tracks to your Playlists but Stations work in a different manner. For Playlists, you have to add every song or album to your playlist. But in case of stations, your playlists will be automatically created according to what you listen the most and what type of music you listen. It also depends upon which songs you give a thumbs up and which you dislike and give a thumbs down. One more important thing about station is that you don’t have to have a premium account to enjoy it. Although you will be needing a Spotify account to access the application. To use the stations feature users have to download and open the Spotify Stations on there devices. The the next step is to log in with your Spotify Account. Thats it. Users can now enjoy the stations by scrolling down the screen.

Get Rewarded with Exclusive Offers

Yes you read that right. You will be given special gifts and offers for being great fans of your favourite artists. And the best part is that you don’t have to be premium member for that. Users having free subscription can also get these offers. So how does it work? This feature is known as the Fans First Emails. And the Spotify fans receive access to presale tickets for concerts and exclusive merchandise not available anywhere else. The only thing you have to do is to ensure that your notification Spotify news and Offers emails is enabled and also that you have your correct email address listed there. You can get lucky anytime!

Who does not love a smooth transition between two tracks when they are playing? Well, if you also want your tracks been played to have crossfade feature enabled then this trick is just the right thing for you. Sometimes the gap between two tracks being played in a queue seems to be very annoying. This feature is a great solution for that time. For Desktop Users. Desktop users can go to “Settings” and then scroll down and select “Show Advanced Settings”. Then click on “Playback” and click on “Crossfade Songs”. The Crossfade songs button will turn green showing that the feature is enabled. The user can select the length for crossfade in this section too. For iOS Users. iOS users have to go to “Home” and then “Settings” and then click on “Playback”. Under playback the “Crossfade” function is available. The user can click it and turn it on. For Android Users. Android users have to go to “Home” then choose “Settings” and then “Crossfade”. Clicking on the Crossfade function will enable it.

Learn about your Favourite Artists

Spotify is a great place to gain complete knowledge about your favourite artists. Desktop users can search for the name of the artist in the search bar or any song and album and then further open it and click on the artist. Another option is to choose any song you like or album and then if you want to know about the artist you can further check the details. Users can also right-click on the song they like or album and choose “Go to Artist”. For mobile and tablet users the first step is the same to choose the favorite track, album. Then the next step is to click on the three dots available right next to the song and click on it and choose “Go to Artist”. There is plenty of information available about the artists, but it also depends upon there popularity. Users can find there biography, images and lots more. It is also a great place to find all the tracks of the artist at one place. It is also easy to find when and where the latest concert is happening and how to book tickets for the same. Users can also get an idea of what the fans of that artist are listening to other than that artist. 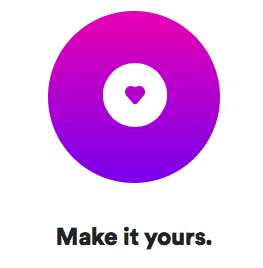