Http://puzzledragonx.com/en/monster.asp?n=1843Why is she good?* Very good stats (~790 weighted)* 7 turn board change max skilled* Decent awakenings (even has an SBR)* Poison orbs can sometimes be overlooked since you also get Heal orbs or you simply run a high RCV team such as Ra Dragon* Offers green color coverage that Kalis cannotVery good card that is "free". The dungeon, however, may be a pain to farm for people.

Shiva drag users farm for the Elia and Grisar in takenminakata.

Probably the easiest descend for us. Make sure to bring full board clear for grisar. My team is shiva drag/ares/ares/ares/Urd/shiva drag. Go wild guys and may the skill up rng be with you.

LS: 4/1/4 and 7x6 board**- UnbindableThis card is very good for stalling since it is very tanky and does not have an ATK multiplier(which is good for stalling trash floors w/o hitting too hard to kill)Use: - AA for cross leader switch (not the best)- Challenge mode A1/2/3 and ColoShe brings 2 sbr for 100% when doing challenge mode. A build I have in mind is: Edward/ No. 4313 / Kamimusubi /x/x/ Edward This team is 100% bind and skill bind resistant with FUA and all colors. Quality roll for a 5* IMO.

Amen is insanely hard to use.

Almost forgot to claim mine.

Daily reminder to check your battery before comboing.

I just died to DRALL in A3 because skyfall did not save me from the inevitable 4 combo :(

The version 12.2.0 update is now available in the Google Play Store. Save yourselves a few precious seconds tomorrow morning :)

The team is as follows:Giga(base form)/Bigfoot with 3 attacker killer latents OR Equip #4234 or #4236/SB Stick/SB Stick/SB Stick/Giga(base form)Bigfoot has 2 attacker killer awakenings in evo form.If you're P1, have a light orb change or bicolor with light on one of the SB sticks.Ideally those SB sticks are Whaledors, but aim for 20 SB in total. So you could do Giga/Bigfoot/Ilmina/Whale/Whale/Giga which would give you 21 for example. Bigfoot should do about 200 million damage to Dictator by himself. The only concern could be Sagat, but some plusses on the team, which you probably already have, will fix that. Plus you can easily match any locked reds for another combo and more damage.

If you can’t cheese September C9 but have DMeta and one Kuroyuri, try this team 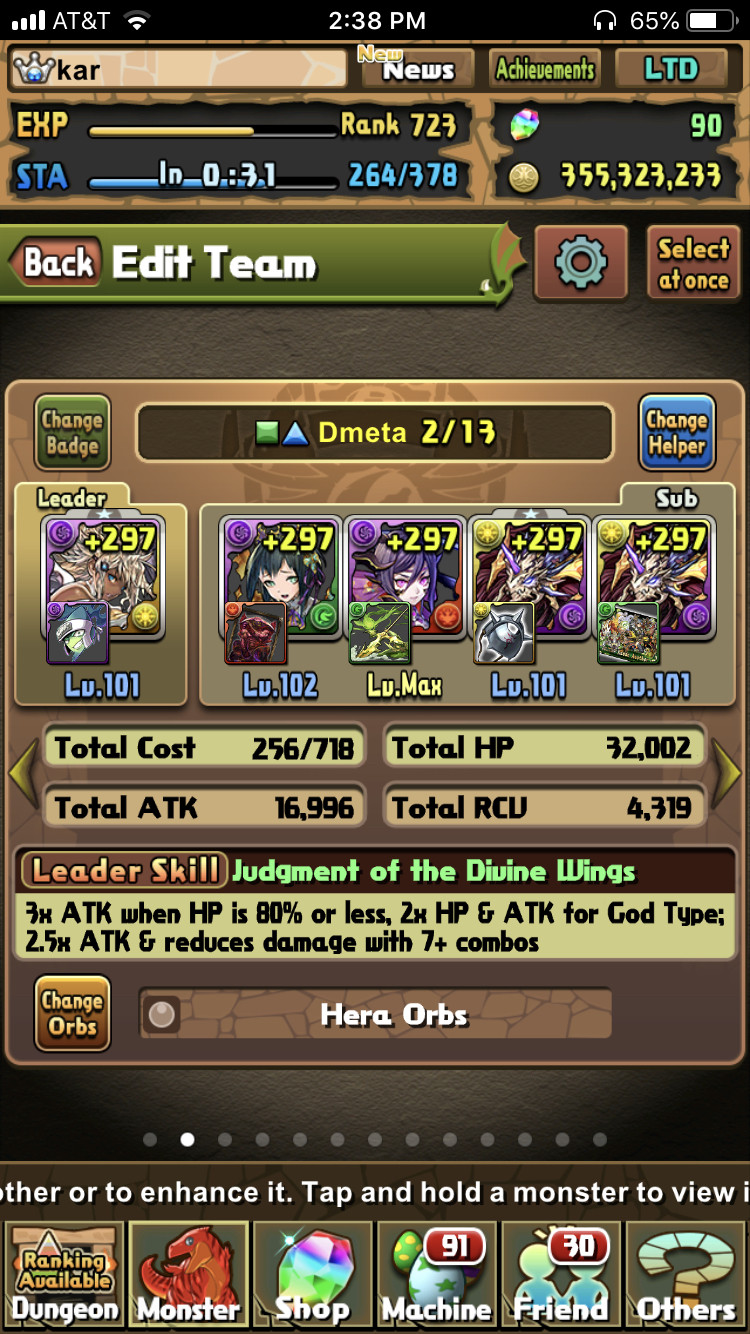