Add a Bit of Vibrance to Enhance Your Colors

Vibrance is one of the most useful sliders in the Lightroom basic adjustments panel. It essentially does a ‘smart saturation’ of the entire scene. In other words, vibrance boosts the colors that aren’t very saturated, but leaves the saturated colors alone. This allows you to bring out colors–without worrying about oversaturation. Why is this so useful? Color is one of the first things people notice when they see your photos. And if the colors are flat, it’s the first strike against the photo. But if the colors jump out at them… Well, then, the shot will seem that much better. So I suggest you always add a bit of vibrancy to your shots. Of course, don’t overdo it–but a little color can go a long way!

Increase the Tonal Range for the Best Images

If you’re looking to improve your photos, you can always increase the tonal range. Note that the tonal range simply refers to the range of tones throughout the photo. A photo with high tonal range has bright whites and dark blacks. Whereas a photo with low tonal range is very dark, very gray, or very light. Now, the higher the tonal range, the better your photos will look (generally speaking). So it makes sense to enhance the tonal range whenever you can. One of the easiest ways to do this is with the whites and blacks sliders in Lightroom. Simply push the whites slider up–until you start to see a loss of detail in the brightest parts of the image. And push the blacks slider down–until you start to lose detail in the darkest part of the image. That’s all you have to do, and you’ll have maximized the tonal range! Related Post: Lightroom Workflow Guide (Simple Tips to Get You Started)

Boost the Contrast to Make Your Photos Pop

As I said earlier, you don’t need to do a lot of post-processing. Just a little bit should do it. And one of the absolute best ways to give your photos a little extra oomph… …is to boost the contrast a bit. You see, the more contrast you add, the more powerful the whites and blacks become. And the more powerful the overall photo looks. Now, you can up the contrast with the basic contrast slider in Lightroom (or in Photoshop, or any other basic editing program). And this should do just fine. But if you want more fine control over your image, feel free to use more specific contrast sliders, or even a tone curve, to create a more careful contrasty look.

Look at Beautiful Photography to Hone Your Sense of Composition

All the tips I’ve given above have been about taking pictures in the field. But did you know that there are a few ways to improve your photos… …that you can do while sitting on the couch? It’s true. And one of them is simply looking at other beautiful photography. You see, the more you look at other photography, the more your sense of composition is honed. And you’ll start to see compositions everywhere–which is exactly what you want. All you have to do is find a few photographers you really admire. Ideally, these photographers should be in the genres that you like the most. So if you enjoy shooting birds, find amazing bird photographers. And if you enjoy shooting street photography, look for amazing street photographers. After that, it’s just a matter of following them on social media, and checking out any new images they post to their website/blog. Keep it up every day. And pretty soon, your sense of composition will be growing in leaps and bounds!

Use Complementary Colors to Make Your Photos Stand Out

Color is one of the most overlooked aspects of beautiful photography. This is probably because it’s so easy to forget about. The colors in the scene are the colors you always see–so you don’t even think about them. But here’s the thing: If you can use color to your own ends… …well, you’ll get some truly gorgeous photos. It all starts with selecting your colors deliberately. When you go to choose a composition, make sure you have a few nice colors in the scene. Not too many, mind you–because too many colors can easily overwhelm the viewer. But which colors should you actually choose? My recommendation is to start with complementary colors. These are heavily contrasting colors, and they sit opposite one another on the color wheel. For instance, green and red are a complementary color pair. Same with yellow and purple, as well as blue and orange. If you can isolate complementary color pairs in your shots, you’ll be stunned by how your photos increase in power. They’ll stand out like they never have before!

Get Down on Your Subject’s Level for an Intimate Image

When it comes to photography, nothing is more off-putting than an impersonal image. Instead, you want to create a photo that feels as if you’re inviting the viewer into the subject’s little world. And one of my favorite ways to create that connection, that intimacy: Get down on your subject’s level. For portraits of children or even pets, this means crouching down until you’re shooting directly into the eyes of your subjects. For flowers, this means lying on the ground so your lens is just a few inches off the ground. Related Post: Dog Photography Tips For landscapes, this means getting down low so that you can capture the vastness of the scene. It’s a pretty easy thing to do–and it’ll make a huge difference in your photos!

Increase the Subject to Background Distance to Enhance the Blur

In the previous tip, you discovered how a wide aperture can increase the background blur quality. But there’s another way to enhance your background blur: By keeping a large distance between your subject and the background. You see, the closer your subject is to the background, the less blurry the background appears. This is because the wide aperture will only blur out so much–and the blur gets stronger the farther away it is from the point of focus. One way of increasing the subject to background distance simply involves moving your subject. You can bring it out from the background, then photograph it. This is easy if your subject is a person, but less easy if your subject is an inanimate object or in the wild. Which is why you should consider other options, such as moving yourself to either side (while following the subject with your lens). A neat trick is to get down low to the ground and shoot outward. That will ensure you don’t include the ground in your background. Instead, you’ll include some beautiful area off in the distance! And speaking of getting down low:

Use a Wide Aperture for the Best Backgrounds

Aperture refers to a diaphragm in the lens. The wider the diaphragm, the less of the photo that’s in focus. And the narrower the diaphragm, the more of the photo that’s in focus. Now, the aperture is controlled by your camera, and it’s represented by something called f-stops, like this: f/2.8, f/4, f/5.6, etc. The smaller the number, the wider the aperture. And the better looking the background. Note the difference between a shot with a wide aperture: And a shot with a narrow aperture: In general, wide apertures create better backgrounds overall. Backgrounds that will make your subject stand out, because they’re blurry and non-distracting. Related Post: Wide vs Narrow Aperture: 10 Examples and Camera Settings Of course, your aperture can be too wide. If you use an aperture of f/2.8 on a subject that’s fairly deep, you’ll end up blurring out important parts of the subject. And the image just won’t work. But just keep in mind the value of a wide aperture–and how it can give you a beautifully blurred backdrop!

Tips for the Amateur Wedding Photographer

These tips are designed to help you capture the best images at the wedding. The initial communication is important, as you will find out about the couple’s ideas and wishes. This day is all about them and what they want to have captured. Do as much research and scouting for light and settings as you need. This ensures you are prepared and confident on the wedding day. You are not a guest or a family member, you are working, so focus on the day at hand. Read through a few more of our tips on how to ensure the day goes according to the plan. 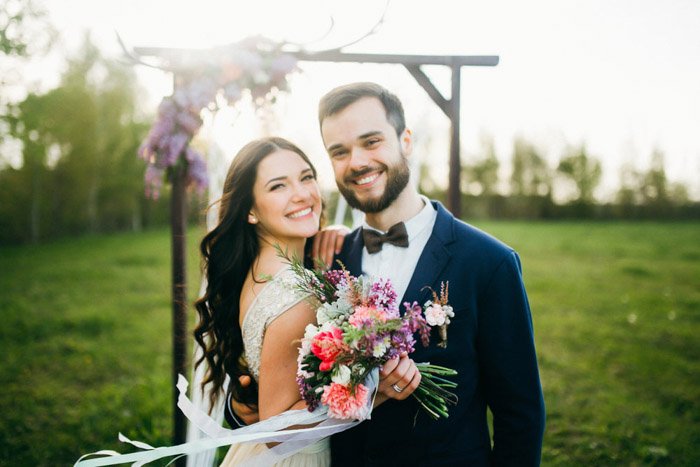