Above all else, you have to know who your users are—inside and out. That means knowing all the demographic data your analytics app(s) can pull, yes. But more importantly, it means knowing what they need, and what stands in the way of them achieving their goals. Getting to that level of empathy requires more than careful analysis of stats. It requires getting to know the people who use your website. It means speaking with them face to face, watching them use your product (and maybe others), and asking them questions that go deeper than, "What do you think of this design?" What are their goals? What stands in the way of them achieving those goals? How can a website help them overcome or work around those challenges? Don't stop at knowing what your users want. Dig deeper and find out what they need. After all, desires are just outgrowths of needs. If you can address a user's deep-seated need, you'll address their wants while also fulfilling more fundamental requirements. The insights you'll uncover from analyzing data and speaking with users will inform every decision you make, from how people use your interface to what types of content you’ll highlight within that interface.

Define how people use your interface

Before you design your interface, you need to define how people will use it. With the increasing prevalence of touch-based devices, it’s a more pivotal concern than you might think. Just look at Tinder: the app’s user experience is literally defined by the ease and impulsivity of a simple swipe. People use websites and apps in two ways: directly (by interacting with the interface elements of the product) and indirectly (by interacting with ui elements external to the product).

Many interactions with a site or app have consequences: clicking a button can mean spending money, erasing a website, or making a disparaging comment about grandma’s birthday cake. And any time there are consequences, there’s also anxiety. So be sure to let users know what will happen after they click that button before they do it. You can do this through design and/or copy.

In the real world, the environment gives us feedback. We speak, and others respond (usually). We scratch a cat, and it purrs or hisses (depending on its moodiness and how much we suck at cat scratching). All too often, digital interfaces fail to give much back, leaving us wondering whether we should reload the page, restart the laptop, or just fling it out the nearest available window. So give me that loading animation. Make that button pop and snap back when I tap it—but not too much. And give me a virtual high-five when I do something you and I agree is awesome. (Thanks, MailChimp.) Just make sure it all happens fast. Usability.gov defines any delay over 1 second as an interruption. Over 10 seconds, a disruption. And the latter’s generous: for about half the U.S. population, 3 seconds is enough to cause a bounce. If a page will load in under 5 seconds, don’t display a progress bar, as it’ll actually make the loading time seem longer. Instead, use a visualization that doesn’t imply progress, like Mac’s infamous “pinwheel of death.” But not that. If you do use progress bars on your site, consider trying some visual tricks to make the load seem faster. 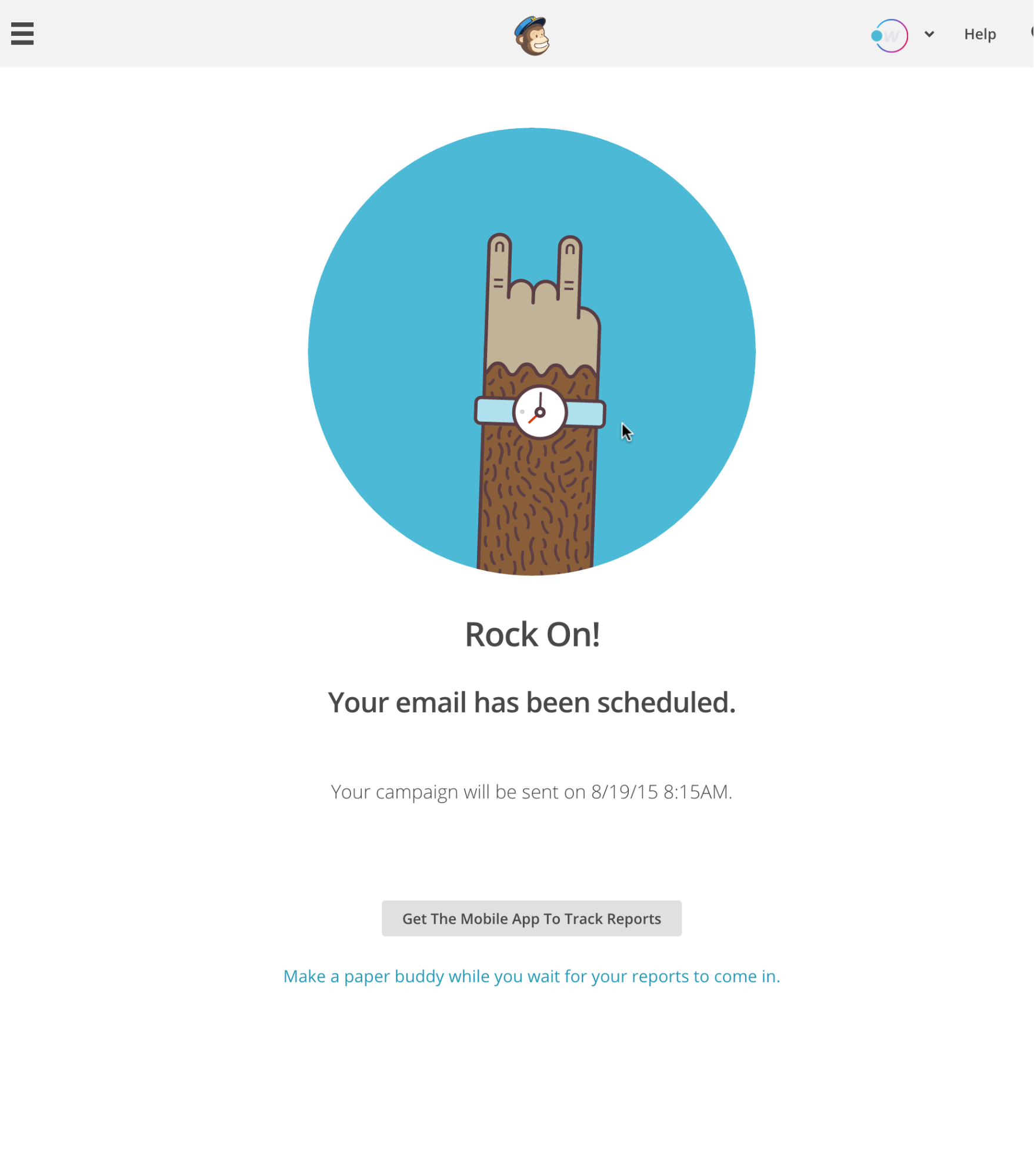 Fitts’ Law, a fundamental principle of human-computer interaction (HCI), states that: The time to acquire a target is a function of the distance to and size of the target. In other words: the closer and/or bigger something is, the faster you can put your cursor (or finger) on it. This obviously has all kinds of implications for interaction and user interface design techniques, but three of the most important are: Make buttons and other “click targets” (like icons and text links) big enough to easily see and click. This is especially important with typography, menus, and other link lists, as insufficient space will leave people clicking the wrong links again and again. Make the buttons for the most common actions larger and more prominent. Place navigation (and other common interactive visual elements, like search bars) on the edges or corners of the screen. This last might seem counterintuitive, but it works because it lessens the need for accuracy: a user doesn’t need to worry about overshooting their click target. While you’re thinking about element placing and size, always keep your interaction model in mind. If your site requires horizontal scrolling rather than vertical scrolling, you’ll need to consider where and how to cue users to this unusual interaction type.

Being highly creative types, designers tend to love to reinvent things—but it’s not always the best idea. Why? Because a revamped version of a familiar interaction or interface adds “cognitive load”: it makes people think again about a process they’ve already learned. Obviously, you can reinvent the wheel all you want—but only if it actually improves the design. This rule of thumb explains why Google Docs’ menu bar features almost all the same options as Microsoft Word’s before Vista: ‍ It also explains why Pocket had to change the placement of the archive button in their Android app a few years back. Up till fall 2013, the archive button was at the top left of the screen—right where Android design specs said the “Up” button should be. Pocket wanted to focus people on the reading experience, and not duplicate an existing hardware control, but the inconsistent placement caused new users to accidentally close and archive the article they were reading, rather than simply returning to their reading list as expected. That tiny change "increased the likelihood [new users] would continue using Pocket from this point onwards by 23%."

Make your interfaces easy to learn

When it comes to simplicity, people often cite a paper by Harvard psychologist George Miller called, “The Magical Number Seven, Plus or Minus Two: Some Limits on our Capacity for Processing Information.” The article suggests that people can only hold 5 to 9 things in their short term memory with any reliability. Miller himself called this a coincidence, but that doesn’t seem to hold anyone back from citing him. That said, it’s only logical that the simpler something is, the easier it is to remember in the short term. So, whenever possible, limit the number of things a person needs to remember to use your interface efficiently and effectively. You can facilitate this by chunking information, i.e., breaking it into small, digestible chunks. This idea dovetails with Tesler’s Law of Conservation of Complexity, which states that UI designers should make their interfaces as simple as possible. That can mean masking the complexity of an application behind a simplified interface whenever possible. A popular example of a product failing to follow this law is Microsoft Word. Most people only do a few things in Word—e.g., typing—while others can use it to do all sorts of powerful things. But around the world, everybody opens the same version of Word, with the same UI, leaving your average Joe—who's not a power user—overwhelmed by the variety of options they’ll probably never use. This led to a concept called progressive disclosure, where advanced features are tucked away on secondary interfaces. You’ll often see this on websites’ home pages, where short chunks of copy introduce a product or feature, then link off to a page where users can learn more. (This also happens to be a best practice for mobile design, where robust navigation is always a challenge.) Pro tip: Avoid using “learn more” and similarly non-specific text in links and buttons. Why? Because it doesn’t tell users what they’ll “learn more” about. Often, people simply scan a page looking for a link that takes them where they want to go, and “learn more,” repeated 15 times, doesn’t help. This is especially true for users of screen readers.

Too much of the web screams at us: “Banners” suddenly expand to become full-screen ads. Modals pop up, imploring us to subscribe to blogs we haven’t had a chance to, you know, read yet. Video interstitials stop us in our tracks, forcing us to watch precious seconds tick oh-so-slowly by. And don’t even get me started on the widgets, flyouts, tooltips … Sometimes I long for a calmer web—and Hicks’ Law gives us all a reason to build one. The idea’s as simple as its end result: the more ui options you present a user, the harder it becomes for them to make a decision. This impacts almost everything we build:

Listen to the data

To err is human; to forgive, divine. Alexander Pope, "An Essay on Criticism" People make mistakes, but they shouldn’t (always) have to suffer the consequences. There are two ways to help lessen the impact of human error: